Colombia has a coastline on the Atlantic Ocean and the Caribbean Sea (about 1,800 km) and the Pacific Ocean (about 1,500 km). It is bordered to the north by Jamaica, Haiti and the Dominican Republic through the Caribbean Sea, to the west by Panama (225 km), and it has sea borders with Costa Rica and Guatemala. Its southern neighbors include Ecuador (590 km), Peru (1,496 km) and Brazil (1,643 km), and it is bordered to the east by Venezuela (2,050 km). Colombia has the total area of 1,138,910 km2. It is the fourth largest nation in South America after Brazil, Argentina and Peru, and the seventh largest country in the entire American continent. The land and water area is 1,038,700 km2 and 100,210 km2, respectively. The territory is divided in four geographical regions: the Andean Highlands (consisting of three mountain ranges and valley lowlands), the Caribbean Lowlands, the Pacific Lowlands and the Llanos, and tropical rainforest on the south of Colombia. Colombia possesses a number of islands in both the Pacific and the Atlantic Ocean.

The striking variety in temperature results from differences in elevation. Temperatures vary little with the season. The majority of populated areas lie in the hot (under 900 m in elevation), temperate (between 900 and 1,980 m) and cold (between 1,980 and 2,950 m) climatic zones. Rainfall is heaviest in the Pacific highlands and in parts of southern Colombia. The Andean Mountains extend in Colombia from southwest (Ecuador borders) northeastward (Venezuela borders). The Andes are divided in Columbia in the Columbian Massif (Macizo Colombiano) and another three branches (Oriental, Central and Occidental). They form two long valleys - Magdalena and Cauca – through which rivers of the same name run. The highest mountain in Colombia is not in the Andes but in the Caribbean plain - Sierra Nevada de Santa Marta with its highest points named Pico Cristobal Colon (5,775 m) and Pico Simon Bolivar (same elevation).

The southern part of Colombia is composed of savanna and rainforest, crossed by rivers, tributaries of the Amazon and Orinoco systems. The northern part called Los Llanos is a savanna region (mostly in the Orinoco basin). The southern part is called Amazonia and is covered by the Amazon rainforest and belongs mostly to the Amazon basin. The Caribbean and the Pacific coastal plains are on the north and west of the Andes, respectively. Colombia has five traditional natural regions: the Andean, the Caribbean, the Pacific, the Orinoquia, and the Amazon Regions. The Insular Region separated on the coast is considered by some a region. 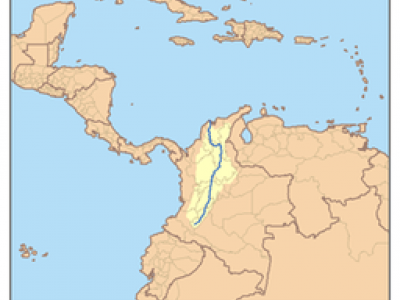 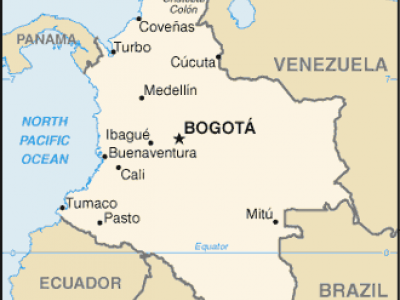